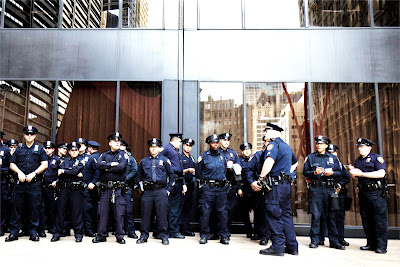 The International Journal of Nonsense will continue to publish despite its entire editorial team's being arrested, the owners have announced.

Speaking from a grassy knoll in Dallas, chairman of Man Mountain Enterprises, Mr Grave Consikwenses said: It is unfortunate that our entire editorial staff decided to put on balaclavas last night and break into the Bank of Sidings. It is even more unfortunate that they were caught. But an august journal like the International Journal of Nonsense is more than just a group of writers and researchers. It is also a dedicated team of advertisement sales personnel.

Mr Consikwenses went on to explain that the IJN team are innocent until proven guilty and that he would stand behind them to the last. His decision, he explained, to replace them immediately was purely a matter of logistics.

Speaking from his cell in Catford Sidings Police Station, former IJN editor Horse McBumblefluff said: We would have got away with it if it hadn't been for those pesky kids.


Photo by Felix Koutchinski on Unsplash