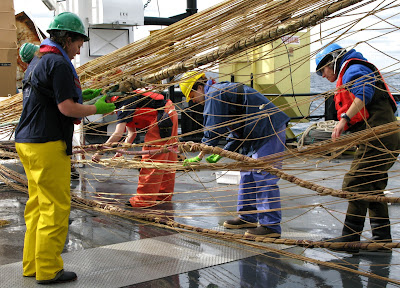 Miffuanian trawlers have steamed up Catford Sidings High Street and stolen all the battered cod from the Star Chip shop, in a moved described by Sidings' authorities as provocative.

The Royal Navy says it is unable to patrol Catford Sidings High Street against foreign trawlers because its destroyers are too wide and there is insufficient water for them to float.

But Grevin Mudworthy, mayor of Catford Sidings, has asked the Navy to send a submarine up the sewage system. These Miffuanian fishing boats are breaching EU quotas by turning up at chip shops and taking all their fish, he said. It has to be stopped.

They were very sneaky, said Hugh Jappetite of the Star chip shop. Two fishermen entered from either end of the counter with a large net which they threw over our warmer. As they departed, the net was winched at high speed and all our battered fish disappeared out the door.

A spokesman for the Navy said Catford Sidings' antiquated sewage system was never designed for modern submarine warfare but declined to deny that submarines would be deployed.

Photo by NOAA on Unsplash