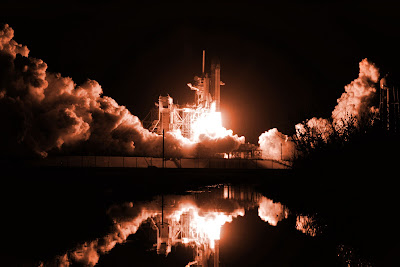 Tests of the marmalade-powered Nonsense Rocket ended in disaster yesterday when bits of peel got stuck in the rocket motor and the device crashed to earth only moments after launch.

Scientists at the NonsenseLabs in Caterwall Slimmenpill have been working on the rocket for months in a bid to prove that conserves can successfully be used to power space missions. However, some experts say that marmalade-powered space travel is impossible due to the lack of oranges in space.

In the history of everything that has worked, there has always been a stage when it didn't work, said Prof Bagel P Fungass of the NonsenseLabs. We are at that stage now and this is to be expected. Powering a rocket by marmalade is not a trivial matter.

The scientists are now working on a rocket design that works on peel-less marmadale. If it successful, its first mission will be to carry orange pips to Mars. It is thought that this will remove the only real obstacle to the rocket's development by putting oranges into space.

If orange trees can be successfully grown on Mars, said Prof Fungass, then the people of Catford Sidings may be the first to live on another planet.

The mayor of Catford Sidings commented that the Nonsense Rocket scientists are already living on another planet.

Photo by NASA on Unsplash