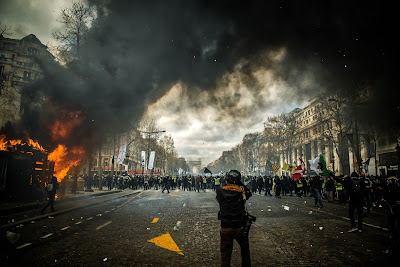 Pro-mattress protestors clashed violently with futonists in the centre of Catford Sidings this afternoon.

No-one was hurt owing to all the padding. Some mattresses were singed slightly when a birthday cake was thrown, candles alight. One man was taken to hospital for precautionary tests after carrying a futon for three miles. He was reported as feeling "tired".

Police say the town centre has returned to normality, despite the fact it has been nowhere near normal since the 1957 fudge wars.

Photo by Randy Colas on Unsplash

3:51 PM
Teens in Wackfactor Natwack have used a 3D printer to print a printer. The printer they have printed will be used to print more printers. Some zebras are sporting horizontal stripes this season claiming they are slimming. This has sparked road-safety fears. Pillar boxes in Catford Sidings are to be painted yellow and bent slightly as part of the celebrations for British Banana Week. Parts of Wales are under several feet of rock tonight after being declared "hilly". Ancient geological activity is being blamed. More than 82.4% of zigs are followed by a zag, research by the Institute of Things has revealed. No-one knows why. Plans to make cheese rolling safer by replacing the cheese with howitzers have been branded as lunacy by Gloucester police. Airlines are to improve the flavour of tea at altitude by adding sponge fingers. This will also make the tea safer during turbulence. Photo by Dan Cook on Unsplash
Read more